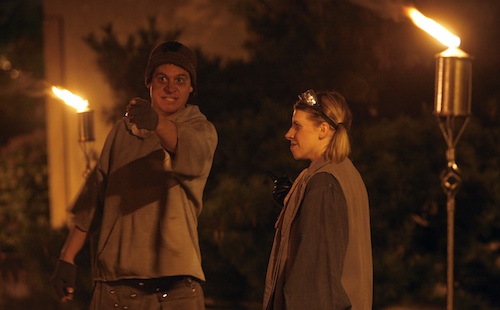 My personal journey toward climate activism, like many others’, went something like this: see Al Gore’s movie (An Inconvenient Truth, 2006), get scared, look for more information, find little (at the time) in mainstream media, get more from alternative media sources, scientific journals and books, be overcome with terror and grief with no outlet, because no one I know is talking about this climate crisis! No one’s doing anything about it! Politicians are still arguing about whether global warming exists! And in the ensuing cognitive dissonance between scientific fact and widespread cultural denial, I become caught in a stasis of dread and helplessness, like a fossilized insect in amber, burying my face in my hands, not wanting to look. I think, for many people, not much has changed in the last ten years, except that the news has become more dire and more widely reported, but still our politicians argue over whether global warming exists and/or what to do about it, including those who’ll be representing our interests at the next U.N. climate summit, scheduled for Paris in December.

As a writer I often processed my feelings through my work, and so at this stage I wrote a number of dystopian stories and plays (photos from one of them here), and even an unsold TV pilot about the dire future that awaits us if we continue with “business-as-usual,” blithely combusting fossils until the resulting runaway greenhouse effect makes this planet unlivable, destroying millions of innocent species on the way. Doing the creative work served to loosen the sense of helplessness and inner “freeze,”– what our nervous systems often do when faced with a threat that we can neither fight nor flee from– and this melting allowed me to open my eyes again.

The emotional shift I describe is one of our intentions behind organizing a Climate Action Arts Festival: to offer an outlet to artists like me, who are caught in a deep freeze of dread because this slow-motion crisis won’t go away by ignoring it, or by complaining how hard it is to fix and how expensive it is to fix. This festival, in part, is an invitation to artists to simply take it on, this situation we’re in as a culture and individuals, to face the feelings and process them through the great transformative engine of our creativity. And to invite our communities to join us, to come and witness and participate in this opportunity to see clearly, so that we can all respond wisely.

When my work allowed me to open my eyes again, what I saw was example after example of innovation coming out of the growing sustainability movement. Not just renewable energy projects, but antidotes to carbon and other pollution in every sector of society, from zero-waste manufacturing, to zero-emissions vehicles and building designs, to organic food production (on roofs and in empty lots!), to sustainability as a core economic philosophy taught at business schools. So I began to see in a very practical and life-affirming way that the horrific future I feared is actually avoidable, if we were to marshal our will and ingenuity and verve to transition away from a fossil fuel-based economy to a more sustainable way, and of course this has to happen NOW, as quickly as possible. It’s in the interest of “business-as-usual” to slow it down, so it’s up to us, those who care about life, to gather and express our collective will for sustainable change powerfully enough to sweep aside those who would stand in its way.

This is the second intention of our Festival: to expand the base of the climate action and sustainability movements, to help raise the many voices needed to energize our reinvention, despite significant momentum in the other (backwards) direction. In my own mind and heart, there is no choice but to take to wise action to support a livable future, no matter how daunting, because it’s certain if we do nothing, that future may be lost. I feel that each of us needs to come to this challenging work through the communities and activities we love the most, and for me, that’s the Los Angeles arts scene. VisionLA ’15 invites Angelenos to rev up the joyful, inclusive engine of art to release ourselves from the stasis of helplessness and collectively construct the cultural narratives that both envision and propel us toward a thriving future for all. To art-makers and art-lovers alike: we invite you to join with us in this celebration of the power of art to make change.